What appears to be a worsening novel coronavirus outbreak in China is casting a pall of gloom on Apple (NASDAQ:AAPL) stock and on the companies in its supply chain…

Audio-codec supplier Cirrus Logic (NASDAQ:CRUS) took a slight hit after Apple slashed its fiscal second-quarter revenue guidance this week. The iPhone maker said that the outbreak has caused many of its partner stores in China to shut down and is also impacting the iPhone supply chain, which is ramping at a slower-than-expected pace.

This negative development has been weighing on Cirrus stock of late despite a strong fiscal third-quarter earnings report that surpassed expectations.

However, the drop in Cirrus shares opens up a buying opportunity for savvy investors looking for a growth stock as the problem seems more temporary than long-term in nature. Let me explain why. 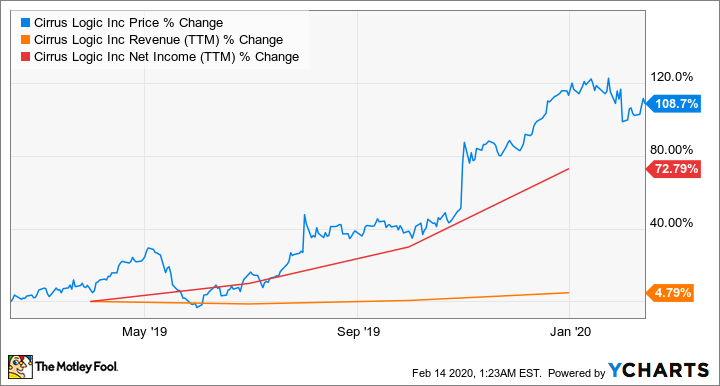 Cirrus has regained its mojo

In an ideal world, Cirrus stock would have taken off as the company’s third-quarter revenue of $374.7 million was substantially higher than the $345 million Wall Street estimate. The company’s adjusted earnings of $1.41 per share easily outpaced the consensus estimate of $1.14 per share.

More importantly, Cirrus delivered impressive top- and bottom-line growth on an annual basis. Its revenue was up more than 15% over the prior-year period. The company’s net income more than doubled from $29.9 million in the year-ago quarter to $68.5 million this time.

The strong bottom-line growth can be attributed to a jump in the company’s gross profit margin. Cirrus recorded a non-GAAP (adjusted) gross margin of 52.8% during the quarter, up from 50.4% in the prior-year period. The margin gain was driven by a favorable product mix, supply chain efficiencies, and lower cost of certain products. Cirrus expects to maintain this gross margin level in the fourth quarter as well, forecasting a range of 51% to 53%.

The chipmaker also anticipates $270 million in revenue in the ongoing quarter at the mid-point of its guidance range. For comparison, Cirrus’ revenue in the year-ago period stood at $240 million, indicating that the company is on track to clock double-digit growth once again.

The turnaround in Cirrus’ fortunes indicates that it is enjoying a strong tailwind from its largest customer, Apple, which supplied 83% of its total revenue last quarter. The chipmaker was down in the dumps last year when iPhone sales were heading in the wrong direction. Moreover, Apple decided to drop the free headphone dongle from its smartphones, creating more challenges for the chipmaker.

Cirrus was reportedly supplying $1 worth of content for each dongle, so its revenue and earnings took a beating thanks to Apple’s move. But now that Apple’s fortunes seem to be back on track, Cirrus is enjoying the sunshine once again. The company’s latest shareholder letter clearly states that it is witnessing stronger volumes and higher content in smartphones. “The year-over-year increase in revenue was primarily driven by increased unit volumes and content for smartphones,” it said.

As Apple is Cirrus’ biggest customer, an uptick in iPhone sales will have a positive impact on the chipmaker’s sales. This is the reason why investors should take advantage of the recent stock price plunge as Apple’s iPhone sales are expected to grow in 2020 after years of stagnation.

Cupertino is targeting more than 200 million iPhone shipments this year. The iPhone maker has reportedly been planning to increase iPhone production thanks to strong demand. And as Apple is expected to launch 5G (fifth-generation) iPhones this year at different price points, it won’t be…

3 Blue-Chip Stocks Outperforming The Market In 2022

4 ‘Strong Buy’ Manufacturing Stocks To Add To Your Portfolio