The 2020 oil market crash is proving to be unprecedented. We’ve seen oil prices fall to some of the lowest levels on record under the massive collapse in demand as the global economy has been put essentially in neutral, and the storage situation is making things even worse. That’s going to…

push any benefit from an economic recovery even further out. It will take many months to soak up all the oil in storage before producers can ramp production back up.

In the interim, many of the weakest companies are going to run out of money; a large shale producer and major offshore driller have filed for bankruptcy protection already, and more are going to join them.

But there’s a group of companies in the oil industry that have the financial strength and diversified operations to ride out even what’s proving to be the worst oil crash in history. Collectively known as “Big Oil,” integrated supermajors such as ExxonMobil (NYSE:XOM), Chevron (NYSE:CVX), BP (NYSE:B), and Royal Dutch Shell (NYSE:RDS.A)(NYSE:RDS.B), along with mega-producers such as ConocoPhillips (NYSE:COP) and other names such as Phillips 66 (NYSE:PSX), a giant in refining, pipelines, and petrochemicals, are viewed as the safest investments in the oil patch. These are the companies that should have the financial wherewithal to outlast any downturn and come out the other side in solid shape.

But should investors be buying Big Oil right now? Sure, these are the best-prepared companies to come through the downturn, but whether they’re worth buying depends on what your goals are, and your expectations. We asked four top contributors who cover the energy industry to weigh in on their thoughts. Here’s what they had to say about Big Oil, and whether (and where) you should invest right now.

John Bromels: I’m pretty bearish on the oil industry in general right now, but Big Oil companies aren’t your typical oil stocks. Whether you should buy or sell them right now, though, depends a lot on what you’re hoping to get from your portfolio.

The bulk of Big Oil companies’ revenue comes from producing oil and gas. Low oil prices are sure to wreak havoc on their top lines just as they will for smaller production companies. The integrated majors also have refining and marketing arms, which are less dependent on oil prices than on demand for gasoline and petrochemicals, but demand has taken a big hit, too.

In other words, revenue and earnings are likely to be horrible until the coronavirus pandemic is on the wane. If you’re looking to preserve capital, or for a distressed stock that will bounce back quickly, you should probably look elsewhere.

That said, all five of the integrated majors have announced spending cuts for 2020 in an effort to preserve cash for their dividends. That’s the same tactic they used successfully during the oil price downturn of 2014-2017. Because of their recent share price drops, their dividend yields are pretty attractive right now: BP and Shell are both yielding double digits, while ExxonMobil’s yields in 2020 are at all-time highs for the company.

If you’re a long-term dividend investor who can stomach a lot of short-term volatility and some risk, buying shares of a Big Oil company isn’t a bad idea right now. Other investors, though, will want to steer clear.

Only one stands out

Matt DiLallo: It seems as if the lower oil prices go, the more interested investors are in oil stocks. Fueling this curiosity is the view that crude will eventually bounce back, taking oil stocks with it. The problem is that the oil company needs to survive this downturn so it’s around for the eventual rebound.

Most big oil stocks should make it through since they boast large-scale operations, low operating costs, and relatively strong balance sheets. However, that doesn’t mean they’ll come out unscathed. Occidental Petroleum (NYSE:OXY), for example, had to slash its dividend to stay afloat because it took on too much debt to wrestle Anadarko Petroleum away from Chevron last year. Others could join it in cutting their payouts, with BP and Shell the most concerning, given their double-digit yields at the moment.

One of the few oil stocks, however, that built its business with a downturn in mind is ConocoPhillips. Because the oil giant spent the past several years selling higher-cost assets and using the cash to build a fortress-like balance sheet, it entered this year with $8.4 billion of cash and the second lowest leverage ratio in the sector. Meanwhile, it quickly adjusted to lower oil prices by slashing its cash outflows by $5 billion as well as holding back some of its oil supplies until pricing improves. That combination of financial strength and flexibility makes it stand out as one of the few big oil stocks worth an investor’s consideration right now.

Big oil’s best days are in the past

Travis Hoium: Big oil stocks haven’t been the moneymakers we normally think of them as being. Over the past decade, competition has kept oil prices low, lots of new technologies such as shale drilling and ultra-deepwater extraction are low margin by historical terms, and demand isn’t growing the way it used to. Add it up, and returns have become pretty anemic for big oil stocks, and they’re getting worse over time: 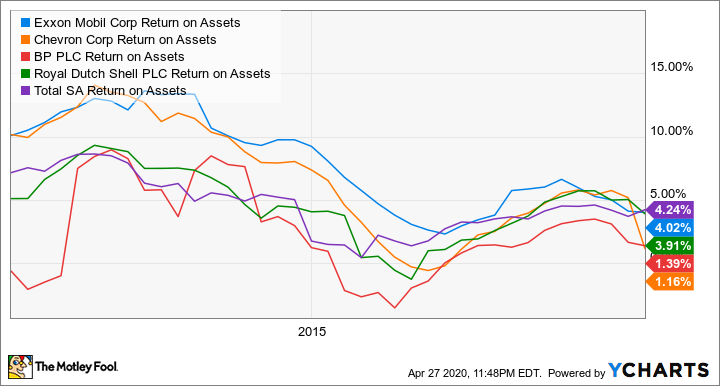 What you have to ask if you’re thinking about buying oil stocks today is, will conditions be better a year or two from now? My answer is no.

Renewable energy and electric vehicles are steadily gaining market share and eating away at traditional sources of fossil fuel demand. Demand growth has also slowed and for a while was negative in the U.S. as people move to cities that reduce commutes and vehicles get more fuel-efficient. I don’t see any of these trends changing in the next decade and don’t think big oil will prove to be a good long-term investment, either.

Money to be made, but look to the future

Jason Hall: My view on oil supermajors is a bit mixed. On one hand, I have little doubt they will survive the current crisis. Oil demand is going to recover once the global economy opens back up, and eventually that will drive oil prices higher. I’m relatively certain that today’s prices will prove profitable for anyone who buys any of the Big Oil stocks and sits on them for a couple of years. I’ve bought Phillips 66 myself, and I think it will be a big winner in the recovery.

But as long-term investments, I side with…