In general, dividend stocks are the best means of turning a rather modest amount of money into a huge sum over the long term.

Their amazing growth potential largely stems from the incredible power of compounding, which occurs when you reinvest dividends. In the second year after buying a dividend stock, you earn a dividend not only on your original investment sum but also on the dividend you received and reinvested in year one, and so on and so on.

No matter your age or how close you are to retirement, you’ll likely find at least one of the following top dividend stocks a good fit…

NextEra Energy and American States Water stocks have returned six times as much as the broader market over the last two decades — and Realty Income stock has beaten the market by nearly nine times! 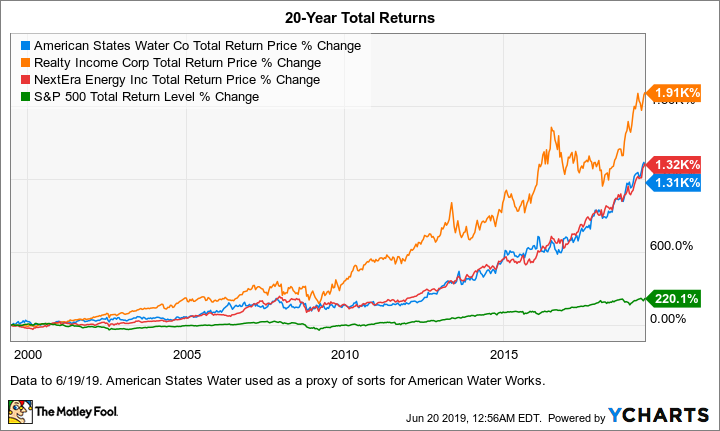 New Jersey-based American Water Works is the largest investor-owned water and wastewater utility in the United States, providing regulated and market-based services to about 15 million people in 47 states and one Canadian province. It has regulated businesses in 16 states — double the number of the second-most geographically diverse U.S. water utility.

Its large size and wide footprint give it an edge over competitors in acquiring small regulated utilities, which is a notable advantage since municipalities across the country are increasing sales of their water and wastewater systems. Water utilities generally expand where they have current operations, as it’s much more efficient than expanding elsewhere.

American Water has increased its dividend every year since it went public in 2008. While it’s not a high yielder, the dividend is very secure, and investors should be able to count on continued annual dividend increases of 7% to 10%.

Realty Income is a real estate investment trust (REIT) that has historically focused on freestanding, single-tenant retail occupancies in the U.S. In April, however, it channeled its inner affluent college junior and ventured abroad for the first time, scooping up 12 properties in the U.K.