Despite growing into a company worth more than $1.5 trillion, its outperformance has… 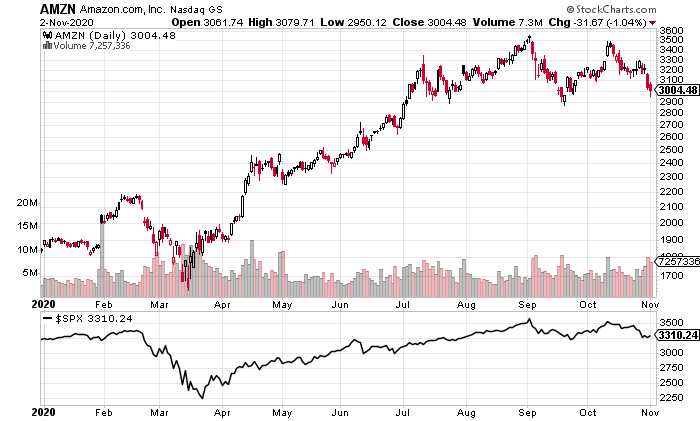 Notably, AMZN hasn’t fallen to the “law of large numbers.” Previously, many companies have reached extraordinary heights in valuation and eventually hit a point, where they were unable to maintain growth in their core businesses. In the past, many companies that became dominant in one area began moving into new markets and faltered. Other companies started focusing more on returning capital to shareholders through dividends or share buybacks.

Despite Amazon’s size, it has navigated this challenge quite capably. For example, in the second quarter, the S&P 500 had a decline in revenue of 10.3%, while Amazon posted a growth rate of 40%.

One major factor is that AMZN’s two major addressable markets continue to expand in size – E-Commerce and cloud computing. In both of these markets, AMZN has been able to use its size and early-mover advantage to create network effects and economies of scale which results in a superior customer experience.

Further, Amazon’s management has proven itself to be quite agile and adept. It’s been so successful that it’s essentially lapped the competition. In E-Commerce, it has 38% of market share with its closest competitor, Walmart (WMT) at 10.5%. In cloud computing, it has a 33% market share which is equivalent to that of its next three competitors combined.

Amazon has essentially tamed the normal forces which bring down a company. Its competitors are far behind, and it doesn’t seem likely to be a victim of hubris which has been the downfall of many big companies in the past.

Given that the E-Commerce market is expected to triple in size and cloud computing is expected to go from a $100 billion market to $1 trillion over the next decade, it’s easy to understand why many investors believe that Amazon’s ascent is likely to continue.

However, Amazon does face one foe that could meaningfully alter its trajectory – the federal government. The increasing power and influence of mega-cap technology companies have placed it firmly on the government’s radar. Further, it’s one rare area of bipartisan agreement. Some of the potential outcomes are increased regulation, a breakup of the company through forced divestment of certain units, or heavy fines levied against the company.

Recently, the Department of Justice sued Google (GOOG) for violating antitrust laws due to its dominance in the search market. Likely, Amazon is also going to face increased scrutiny in the coming months.

The company has drawn the ire of influential Democrats like Senator Elizabeth Warren and Senator Sherrod Brown who have been outspoken against Amazon’s low tax rate, unsafe conditions at its warehouses, and conflicts between operating a marketplace and selling on it.

Typically, Republicans are opposed to government action against businesses, however, they have become increasingly concerned about the concentration of power in the mega-cap technology companies, especially when it comes to censorship.

Amazon founder and CEO Jeff Bezos have also drawn criticism from Republicans for his ownership of the Washington Post, and it could intensify more with his rumored purchase of CNN. President Trump has also attacked the company repeatedly for these reasons which have increased Amazon’s negative perception among Republicans.

Buy These 3 E-Commerce Stocks Instead

While the election outcome may not be clear for days or weeks, it’s very possible that we have some sort of divided government with the most likely outcome being a Democrat President and Republican Senate.

Even if Democrats eke out a majority in the Senate, a lot of power will be concentrated in the hands of centrist Democrats from states like West Virginia, Montana, North Carolina, and Arizona who have conservative leanings on certain issues. This could mean a continuation of our gridlock environment.

It also increases the chances of action taken towards companies like AMZN, since it’s one area of bipartisan agreement. Since it became a public company, Amazon has been the best stock to play the growth in E-Commerce.

However, due to the risk of increased regulation for Amazon, I believe investors should instead focus on other companies like Alibaba (BABA), Chewy (CHWY), and Etsy (ETSY).

BABA has many similarities to Amazon. Today, its shares are trading 6% lower due to delays in the filing of Ant Group’s IPO. However, given the close relationship between Jack Ma and the Chinese government, it’s likely that these issues will be smoothed out.

For investors, BABA is similar to AMZN in many ways. It’s the dominant E-Commerce and cloud computing company in Asia. It also may have more upside given that populations in these countries are larger, and another billion people in Asia are expected to enter the middle class over the next decade.

Note that BABA is one of 5 stocks in the Reitmeister Total Return portfolio. Learn more here.

In addition to its consumer-based E-Commerce platform, it is also the leader in business to business E-Commerce and has exposure to fintech through Ant Group.

In addition to a more diversified business and upside than AMZN, BABA is…

The 3 Worst Stocks to Buy in a Bear Market