It would be an understatement to say that we’re entering June with a high level of uncertainty. While states and localities are gradually reopening across the U.S. as the measures taken to slow the spread of COVID-19 are relaxed, it’s unclear how fast the economy will recover, governmental decisions are being made in a patchwork fashion, and the trajectory the pandemic will take from here is unknown…

If that wasn’t enough, the mass demonstrations against police brutality in major U.S. cities that began at the end of May have added another layer of uncertainty to the mix.

For long-term investors, though, some things haven’t changed. The tried-and-true strategy of finding high-quality companies, buying their shares at reasonable prices, and holding them for years or decades will never go out of style. We asked five of our Motley Fool contributors which high-quality stocks they’d recommend investors add to their portfolios in June. Their picks: U.S. Bancorp (NYSE:USB), Cisco Systems (NASDAQ:CSCO), Intercept Pharmaceuticals (NASDAQ:ICPT), Okta (NASDAQ:OKTA), and ServiceNow (NYSE:NOW).

This best-in-breed bank is at a rare discount

Matt Frankel, CFP (U.S. Bancorp): I’ve had U.S. Bancorp on my radar for years, but its valuation was always an obstacle. The bank’s stock typically carries a hefty premium, with shares trading for roughly double book value at the beginning of 2020 and at that level (or higher) for much of the last few years.

Now, it would be difficult to argue that the premium wasn’t well-deserved. U.S. Bancorp has consistently been the most efficient and profitable of the country’s big banks — just look how its return on equity and return on assets have compared to those of JPMorgan Chase and Wells Fargo, which have historically been highly profitable financial institutions themselves.​ 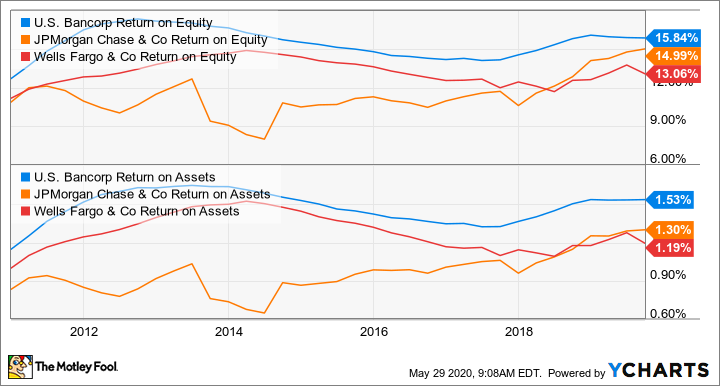 ​However, the pandemic has hit U.S. Bancorp’s stock price hard. Bank stocks in general have been beaten down, primarily over fears that they may take heavy loan losses in a prolonged recession. And unlike most of its big-bank peers, U.S. Bancorp doesn’t have a large investment banking operation to help balance the risk out. (Investment banking tends to do well during turbulent markets.)

​While there is certainly an elevated level of near-term risk for U.S. Bancorp, it has demonstrated responsible lending and excellent management for decades, and I don’t see that changing any time soon. With its stock at its lowest valuation since 2009, I couldn’t resist finally adding the bank to my portfolio.

Tim Green (Cisco Systems): For Cisco, the market leader in enterprise networking hardware, economic uncertainty is a recipe for slumping sales. In its fiscal third quarter, which ended on April 25, sales were down 8%, and the company expects an even larger drop in its fiscal fourth quarter.

There are two things to know about this sales decline. First, dips like this are nothing new for Cisco. It regularly goes through cycles driven by its large customers reacting to uncertainty by pulling back or delaying orders. It’s happened before, it’s happening now, and it will happen again.

Second, Cisco’s Ethernet switches and routers are critical internet infrastructure. If working from home, remote learning, videoconferencing, and other pandemic-driven trends stick around once the crisis recedes, the company’s core business should enjoy a long-term tailwind.

Beyond its networking hardware, Cisco has other businesses that should benefit from these rapidly rising trends. The company’s WebEx videoconferencing software may not be quite as trendy as Zoom, but it’s handling a huge volume of meetings. The company disclosed in its earnings call that the WebEx platform handled 25 billion meeting minutes in April, up three-fold from February. Cisco also has a security business that does around $3 billion of revenue annually. And security was the only product segment for which its sales increased last quarter.

Cisco stock has largely recovered from the market’s pandemic-driven plunge in February and March, but shares remain down around 20% from the 52-week high they hit in July. In addition, it carries a dividend that currently yields 3%, and there’s little chance of a dividend cut. All in all, June could be the perfect time to pick up some shares of this dominant tech giant.

35 billion reasons to be excited about this drug developer

In May, Intercept took a bit of a licking after the Food and Drug Administration indefinitely delayed a panel meeting regarding Ocaliva as a treatment for nonalcoholic steatohepatitis (NASH). Ocaliva is already approved to treat primary biliary cholangitis, an indication that could yield $300 million in peak annual sales, but the real prize is NASH, a liver disease that can lead to fibrosis, liver cancer, and death, and currently affects between 2% and 5% of the U.S. adult population. There are no FDA-approved treatments for NASH, which Wall Street values as a $20 billion to $35 billion untapped indication.

Why the delay? The FDA requested additional information regarding Ocaliva, and the COVID-19 pandemic had previously pushed this meeting further down the line than expected. But a delay of a couple of months is hardly worth fretting over if Ocaliva does nab first-mover advantage in NASH.

In February and April of last year, Intercept lifted the hood on the company’s Regenerate trial in NASH patients. Ocaliva met one of the late-stage trial’s two co-primary endpoints — a statistically significant reduction in liver fibrosis of at least one stage without a worsening in NASH, relative to the placebo — and had three times as many patients demonstrate at least a two-stage decline in liver fibrosis compared to the placebo.

The only reason Intercept’s lead drug hasn’t looked like a slam-dunk is that 51% of the high-dose (25 mg) patients in the Regenerate trial dealt with mild-to-moderate pruritus (itching), and 9% dropped out, compared to 1% for the placebo. The thing is, pruritus is a manageable side effect, and we’re talking about the only therapy that’s delivered positive phase 3 results in NASH. Meanwhile, drug candidates from Gilead Sciences and Genfit face-planted in their respective NASH clinical studies.

Even if Ocaliva gains approval and physicians only choose to target a small subset of NASH patients with it, that still gives the drug $2 billion (or more) in peak sales potential. With biotech stocks regularly valued at three or more times the peak annual sales potential of their lead drugs, Intercept’s market cap of around $2.4 billion makes it a big-time bargain now. That’s why Intercept is the top stock you’re going to want to buy in June.

A niche service with broad appeal

Chris Neiger (Okta): Long before the pandemic was forcing many millions of employees to log in to their work systems from their homes, Okta was creating one the easiest, and safest, ways for them to do so. The company makes cloud-based identity management systems, and in the wake of the coronavirus, its sales are growing faster than ever.

Okta reported its fiscal 2021 first-quarter results on May 28, revealing that its sales had grown by 46% from the year-ago quarter while its subscription revenue had increased by 48%. Okta is also continuing to add new clients — total customers surpassed 8,400 in the quarter, which ended April 30.

Those results would be impressive enough during a typical quarter, but at a time when a pandemic is wreaking financial havoc on many businesses, they point up the fact that Okta’s model can thrive during economic uncertainty. Indeed, while many companies have pulled their guidance, Okta’s management recently reaffirmed its revenue outlook for its fiscal 2021.

Okta is benefiting from the business world’s suddenly more massive need for identity management services while more people are compelled to work remotely, but there’s no reason to think its opportunity will fade away whenever life gets back to something closer to normal. Its dollar-based retention rate in fiscal 2020 was 119%, meaning that the company’s customers tend to stick with it, and sign up for more services over time.

Okta’s share price has climbed quickly over the past few months, but don’t let that keep you from considering it as a long-term investment. The identity and access management market will grow to an estimated $24 billion by 2025, and Okta’s recent performance only demonstrates how effectively it’s carving out a leading position in this space.

Now is the time for ServiceNow

Dan Caplinger (ServiceNow): Cloud computing has taken off like wildfire in recent years. For businesses large and small that want to build out their digital presence and make maximum use of the power of the internet, there are now a huge number of tools available to support their efforts. However, the sheer number of software offerings and cloud-based applications available has created its own challenges, especially among companies that haven’t traditionally had significant amounts of internal IT support.

ServiceNow wants to make it easier for companies to handle all of their technology assets. Its Now Platform — available on a subscription basis to enterprise clients — allows users to create digital workflows that help automate some of the most common functions that those businesses do day in and day out. The platform also integrates information from across an entire business, making it more transparent and available to the workers who need it.

The value of ServiceNow’s platform is evident from its client list. Almost four out of five Fortune 500 companies are customers, and the company boasts more than 6,200 clients overall, including over 900 that deliver at least $1 million apiece in annual revenue to ServiceNow.

For investors right now, a key question about any company is…

2 Beverage Stocks to Quench Your Thirst This Fall