The defense industry comprises companies that take the bulk of their revenue from the government, be it the Pentagon, civil agencies, or the intelligence community.

Traditionally, when one thinks of defense, one thinks of large companies that manufacture military equipment. That’s definitely where most of the revenue and profits lie. But there is also a group of government services firms that manage IT networks, provide consulting and analytics, and take on logistics and other more mundane tasks for the government customer.

Defense shares have been on the offensive in recent years, with the SPADE Defense Index, a collection of defense stocks, doubling from 2014 to 2019 compared to a 50% gain for the S&P 500. After a period of political infighting early in the decade that froze Pentagon budgets and limited spending, the Department of Defense has been making up for lost time by…

ordering billions of dollars’ worth of new fighter planes, warships, and other equipment. Projects put on hold during the budget battles now have the green light, creating new opportunities. 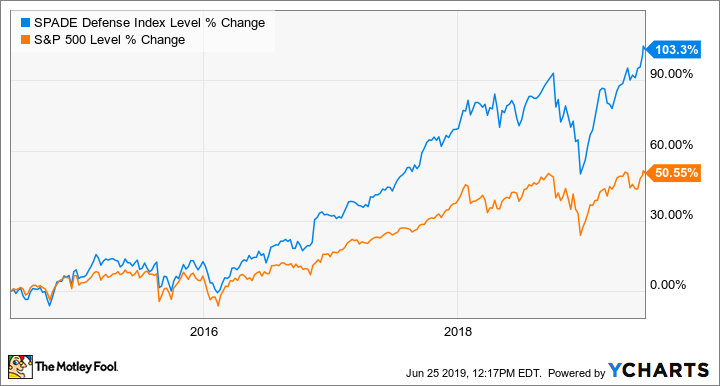 Valuations are up, making now a poor time to take a blanket approach to investing and buying the entire sector. But there are still opportunities to put new money to work.

How to find the best defense investments

Defense companies have a specialized skill set, having evolved to operate in a largely insular world serving the government but not the private sector. They all tend to benefit as an industry when the U.S. government spends more and suffer together when spending goes down, regardless of which way Wall Street as a whole is moving or the direction of the overall economy.

They also enjoy significant barriers to entry, since it’s unlikely that a start-up is going to win a $13 billion contract to build the next aircraft carrier. The government is a particular kind of customer with specialized purchasing policies that are unlike those of the private sector. An understanding of the government’s procurement policies gives defense companies a competitive advantage against outside, more commercial-focused companies.

Because the stocks tend to broadly trade together, investors need to look carefully at what is contained in each portfolio and match corporate strengths with areas of Pentagon emphasis. There are also sometimes situations when a particular company trades at a lower multiple to earnings than its peers. If an investor can identify the reason for that discount and determine whether it is a structural issue or a short-term problem, they can usually spot opportunities to outperform.

Risks and drawbacks of defense investing

Defense stocks are not for all comers. The companies in this sector make a lot of extremely lethal products. Just as with tobacco or marijuana stocks, there are some investors who are not going to feel comfortable putting money into the sector.

Individual companies can also be subject to high-profile headline risk, whether it is being called before Congress to answer to accusations of overcharging, being the target of a tweet storm by the commander in chief, or getting caught up in an international incident involving a former employee. So far, any stock drops resulting from these issues have been temporary in nature, but a long-term investor should be forewarned that these sorts of incidents are possible. Only buy in if you are willing to ride out the storm.

Several defense stocks appear well positioned to outperform the sector as a whole in the quarters to come, either because of the strength of their portfolios or by resolving temporary issues. Here’s a look at a handful of top companies, including some more predictable businesses for conservative investors and a higher-risk, higher-reward idea for those with a higher tolerance for volatility.

Lockheed Martin isn’t just the world’s largest pure-play defense contractor. It has also been a competitive dynamo that is leaving rivals in its dust across many lines of business.

Lockheed has won both major fighter design competitions this century, securing contracts to build both the F-22 and more recently the F-35, which is on track to be a trillion-dollar program for the company and its subcontractors over its life span.

It is also dominating recent competitions involving hypersonics, missiles capable of traveling more than five times the speed of sound, taking in more than $1.5 billion in new contracts in 2018 and leading Pentagon officials to conclude “no other contractor has this level of design maturity” that Lockheed offered.

Lockheed owns Sikorsky helicopters, giving it a pole position in a number of competitions planned in the years to come to replace and modernize most of the military helicopter fleet. It is also a leader in missiles and missile defense; it’s responsible for manufacturing the THAAD anti-ballistic system deployed along the Pacific rim to counter North Korea and for building the PAC-3 missile used on the popular Patriot missile defense platform…